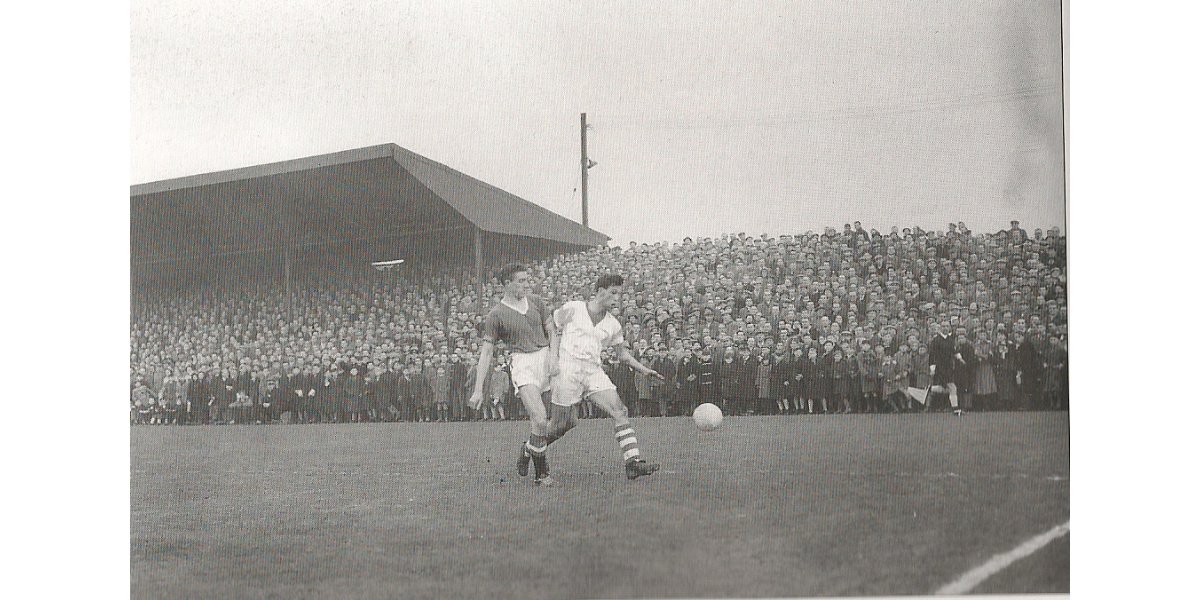 The countdown is on for an event Reds supporters have been looking forward to for weeks – certainly the highlight of Lockdown for frustrated followers of football.

This Saturday, football fans from far and wide will be treated to a fantastic occasion as virtual takes over from reality.

Yes, it is time to venture down the time tunnel and recreate the greatest game in our history, the FA Challenge Cup 3rd Round tie between Workington and Manchester United, played at Borough Park on Saturday 4 January, 1958.

The brainwave of recently appointed chairman, Les Byers, in partnership with media student, Nathan Ridley, this online project is aiming to break the club’s all time attendance record with profits going towards the club’s COVID-19 appeal and NHS services.

It will be a step-up from a normal radio commentary with John Walsh, who else, behind the microphone relieving that memorable occasion that captured the imagination of the Wet Cumberland public sixty two years ago.

This unique production will tell the story of that wonderful day with updated commentary of the match supplemented by video and audio clips, interviews with players and spectators involved in the game, photographs and the customary match programme all brought to the comfort of your home via the wonders of technology.

For those too young to have experienced the real thing, and for once I’m bemoaning the fact that I’m not older than I actually am, it is a wonderful way to partake in a match day experience that has attracted wide spread interest across the globe.

Like the original tie all those years ago, it will be an all-ticket affair so make sure you subscribe to the event in the next few days to avoid the disappointment of being ‘turned away’ by heavy-handed stewards.

The Borough Park encounter attracted a club record crowd of 21,000 all those years ago and the receipts banked in early January, 1958 amounted to £2236 (and two shillings).

The United party stayed overnight in Keswick and they presented WAFC with an expenses claim of £73 (and ten shillings) consisting of their hotel bill of £31 and 10 shillings and rail fares amounting to £42.  Other expenses – printing, posting and advertising, police charges, match officials, gatemen and floodlighting – had to be deducted before Reds, United and the FA claimed their share of the gate, £678 15 shillings and seven pence each!

Compare those figures to what was generated for the Workington v. FC United of Manchester Evo-Stik Premier Division clash at Borough Park in 2015 when the princely sum of £24,920.50 was banked, including gate receipts of about £18,000 made possible by an attendance of 2,603.

The 1958 clash remains the only competitive fixture between the respective first teams of Workington and Manchester United although tenuous links between the clubs go back well over a hundred years.

For three seasons in the early 1900s, we met in Division 1 of the Lancashire Combination with Workington’s first team opponents of Manchester United Reserves.

The record books confirm that United won three of the six league matches played, Workington won two with a goalless draw the outcome of the first meeting.

It was after suffering a 3-0 home defeat by United at Ashfield during the 1908-09 season that we gained notoriety, after an angry mob of Workington supporters chased the referee on his way to the station – behaviour that resulted in a temporary ground closure by the FA.

All other matches and links to Manchester United have generated a modicum of interest but nothing to match the excitement of that famous meeting on the first Saturday of 1958.

Nearly thirty years after United’s first visit to Borough Park, August, 1985 in fact, we were delighted to host Brian Whitehouse’s young team to west Cumbria for a pre-season game which the Manchester Reds won 2-0.

Whilst on the subject of United legends, two players who, without doubt, come into that category, are Bobby Charlton and the late George Best and both can be loosely termed as former Workington players.

Bobby pulled on a sky blue Workington shirt in February, 1978 and guested for us in a friendly against Fort Lauderdale Strikers – his presence attracting a 6,000 crowd to Borough Park on a bitterly cold night.

And George Best skippered a Workington team in a fundraising match against a Lancashire Football League XI in the town on another memorable night thirty four years ago.

It was an honour and a privilege to welcome both superstars, albeit for one unforgettable evening.

But they are not the only players to have ‘served’ both clubs and a former Manchester United captain, Joe Cassidy, played for Workington in the 1907-08 season whilst Billy Boyd represented United and Workington during the thirties.

Boyd only scored four goals for United in a handful of appearances for them but was prolific at Workington, bagging 92 goals in three seasons.

United’s legendary manager, Sir Alex Ferguson, can also claim to have scored at the Theatre of Nightmares, aka Borough Park, doing so for Glasgow Rangers in a 1-1 draw against Reds in 1969.

He was just plain Alex then and his Borough Park goal was one of his last in Rangers colours.

And what about our current squad – have they ever featured in matches against Manchester United?

Present captain Conor Tinnion and Dan Wordsworth did play against Manchester United in the FA Youth Cup a decade ago during their Carlisle United days.  Both contributed impressively as the Blues pulled off a stunning 2-1 victory against a United team which included Corry Evans, Danny Drinkwater, Oliver Norwood, Danny Wellbeck and Federico Macheda.

Reds boss Danny Grainger does confess to being a United fan, and one of his most memorable Old Trafford experiences was watching them clinch the Premiership title during their treble success twenty-one years ago.

Danny will be involved on Saturday adding his welcome input to this eagerly anticipated project.

The players who graced Borough Park in 1958:

The referee on the big day was Sheffield official, Jack Sherlock, and he would also oversee United in the final four months later when they lost 2-0 to Bolton Wanderers.  Sadly though, and in the wake of the Munich air disaster, only Harry Gregg, Bill Foulkes, Bobby Charlton and Dennis Viollet, of those who turned out at Workington, were able to play at Wembley.