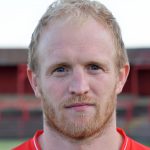 Originally with Carlisle United, he then had a brief stay with Kendal Town before signing for Workington initially in 2011 and now embarking on his eighth season at the club.

Skippered the team in the past, and now approaching his 200th appearance for the Reds.

Had a gap year during which he sampled football ‘down under’, playing for a club in the Brisbane area.