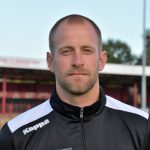 Stepping into his first managerial position this season after a distinguished playing career which began with the original Gretna club, on schoolboy terms, over seventeen years ago.

In 2014, Danny signed for Carlisle United and spent five seasons at Brunton Park, becoming a popular skipper during his time there, taking his career total to an impressive 463 appearances.

The former goal scoring fullback was appointed Workington manager on 1st May.